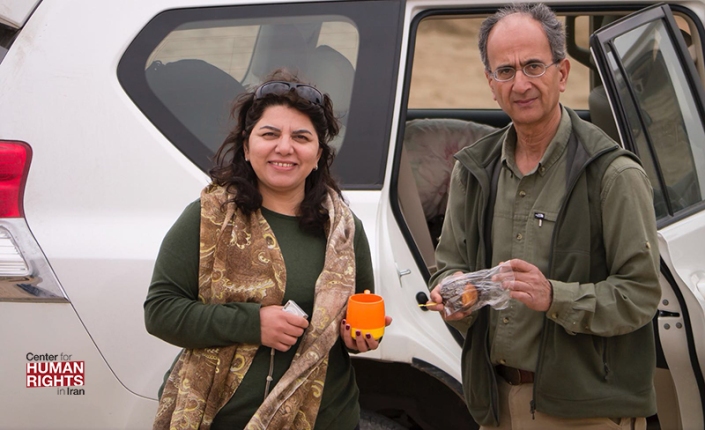 Lives of Seyed-Emami Family Thrown Into “Chaos and Terror”

March 8, 2018—The Iranian government should immediately allow the wife of Iranian-Canadian academic and environmentalist Kavous Seyed-Emami to leave Iran as she wishes and stop intimidating and harassing the Seyed-Emami family, said the Center for Human Rights in Iran (CHRI).

In the early hours of March 8, 2018, the Seyed-Emami family—mother and two sons—were en route to Vancouver, Canada, from Tehran when the mother, Maryman Mombeini, was prevented from boarding the plane at the Imam Khomeini International Airport. Her passport was also briefly confiscated.

“Instead of harassing and intimidating the families of people who have died in state custody, Iranian officials should allow an independent, UN-led investigation into the cause of death of Seyed-Emami, an Iranian-Canadian citizen,” said Hadi Ghaemi, executive director of CHRI.

“As a country with leverage on Iran, Canada should lead that call,” added Ghaemi.

Chrystia Freeland, Canada’s minister of foreign affairs, said she was “outraged to learn” that Mombeini had been “barred” from leaving Iran with her sons.

“We demand that, as a Canadian, she be given the freedom to return home,” tweeted Freeland on March 7.

To date, the Canadian government has not called on Iran to allow an independent investigation into Seyed-Emami’s death.

“Before Mombeini was told her husband had died in Evin Prison, she was interrogated for hours and forced to sign a statement saying she would not speak to the press,” said Ghaemi. “This level of cruelty against a grieving widow is hard to fathom.”

In a statement sent to CHRI on March 7, Ramin Seyed-Emami said his family’s lives had been “thrown into chaos and terror” since they were informed on February 9 that Kavous Seyed-Emami had died in his cell in Tehran’s Evin Prison.

“After being constantly harassed and threatened our family has decided, for the sake of our own safety, to leave Iran and head to Vancouver where we can start a new peaceful life,” he said.

Ramin Seyed-Emami added that his mother had been repeatedly hospitalized due to panic attacks and that he and his brother were under constant “surveillance.”

“The authorities told our lawyers to tell the brothers ‘to shut up or we’ll shut them up,’ the government agents “bumped” into me and said they’re watching me,” he said.

“I truly believe that the only reason the rest of us haven’t been taken away is because we spoke out and refused to stay silent,” added Ramin Seyed-Emami.

Kavous Seyed-Emami, a US-educated sociologist and managing director of the Persian Heritage Wildlife Foundation, was arrested on January 24, 2018, along with several current and former staff members of the NGO.

Iranian officials have accused him of espionage and said he committed suicide in the bathroom of his cell two weeks after his arrest, but no evidence has been provided for the charges and the family was pressured to immediately bury him before an independent autopsy could be carried out.

Ramin Seyed-Emami said that he was given a video of his father’s last hours alive in his cell but the moment of his death was not recorded.

The Seyed-Emami family and UN human rights experts have called for an independent investigation.

At least four detainees have died in state custody in Iran between January and March of this year. All of the cases except one were described as suicides by officials. In none of the cases have independent investigations or autopsies been carried out.

“Just this year, Iran’s former intelligence minister admitted that the authorities were at fault for the death of another Iranian-Canadian, Zahra Kazemi, in Evin Prison in 2003,” said Ghaemi.

“If countries with leverage on Iran are silent now, we may see another 15 years pass by before the facts around Seyed-Emami’s tragic death are finally revealed,” said Ghaemi.