SaveArash# was for a time the highest trending topic on Twitter on Friday December 30, 2016, as social media users around the world expressed their support for imprisoned civil rights advocate Arash Sadeghi on the 68th day of his hunger strike in Evin Prison in Tehran.

The Twitter storm by more than half a million people was a mix of tweets in Persian and non-Persian languages that included the hashtag and called for action to save his life.

What made it more impressive is that Twitter is censored in Iran and can only be accessed with proxies. But the Campaign for Human Rights in Iran has learned that in recent weeks, a number of internet providers in Iran have lifted the filter on Twitter, significantly increasing the Iranian presence on the network.

A number of hardline clerics and other users who joined the discussion questioned the authenticity of the trending hashtag in Sadeghi’s support, claiming the trend was generated by robots, not people. But some Members of Parliament responded to the tweets sent to them about Sadeghi and other imprisoned hunger strikers by calling on the Iranian Judiciary to look into the cases of these imprisoned activists.

A few Iranian MPs even directly addressed the rights violations Sadeghi was subjected to, including the activist’s trial in a closed court without any jury. “Article 61 of the Charter on Citizens’ Rights states that citizens facing political or press-related charges must only be tried in open court and in the presence of a jury,” tweeted Ahmad Mazani, an MP from Tehran.

Mahmoud Sadeghi, another Tehran MP, tweeted “To the extent of my powers as a Member of Parliament, I am following and helping the cases of imprisoned civil rights workers, especially Arash Sadeghi and Ali Shariati.”

Support outside Iran was forthcoming as well. In the UK, football star Gary Lineker lent his support to Sadeghi’s case, describing the imprisoned activist as “beyond brave.”

Sadeghi began serving a 15-year prison sentence in June 2016 for his peaceful activism in defense of civil rights. He was convicted of “assembly and collusion against national security,” “propaganda against the state,” “spreading lies in cyberspace,” and “insulting the founder of the Islamic Republic.”

He went on a hunger strike on October 24, 2016 to demand a review of the six-year prison sentence against his wife, Golrokh Ebrahimi Iraee, for a story she never published and several Facebook posts. He is demanding a review of her sentence.

A few hours after the Twitter storm, Maryam Abdi, a civil rights activist in Iran tweeted that Sadeghi’s lawyer, Amir Raeesian, has been told by the authorities that his demand would be met if he stopped his hunger strike.

Raeesian said Iraee’s case had been sent to Branch 33 of the Supreme Court for review and officials had promised that she would be granted temporary release from Evin Prison after Sadeghi ends his hunger strike, according to Abdi.

Rahmatollah Hafez, a member of the Tehran City Council, who is also a physician, tweeted that he had repeatedly asked the prosecutor to visit Sadeghi in prison in order to check on his condition but had not been successful so far.

Judiciary officials have not yet publicly commented on Sadeghi’s hunger strike or his physical condition.

Sadeghi’s wife Iraee, who is an accountant, said in an interview with the Campaign before being taken to Evin Prison on October 24, 2016 that she had been convicted for writing a fantastical story she had never published and for a “few” of her Facebook posts.

The story, which she had written in a notebook that was confiscated during a search of her home by the Revolutionary Guards, is about an enraged woman who burns the Quran after watching a film about stoning in Iran.

“My stories and poems were confiscated the night agents searched our home. After the third day of questioning, the interrogators put me under pressure and accused me of insulting the sacred. I was interrogated dozens of times about the burning of the Quran in my story,” Iraee said. “Each time I explained that it’s only a story. I told them and I wrote [in my defense statement] that if what I did was a crime, then many scriptwriters and novelists should be arrested for committing the same crime. But they didn’t care, and in the end, they gave me the maximum punishment.”

“They put my husband in a situation where he could hear my interrogation sessions about the burning of the Quran and how I was put under pressure [to confess under] threats of execution. They caused a lot of psychological anguish for both of us,” she added.

Arash Sadeghi began his hunger strike as soon as his wife was taken from their home to Evin Prison, to protest her innocence.

Sadeghi received is 15-year sentence, issued by Judge Abolqasem Salavati of Branch 15 of the Revolutionary Court, in May 2015. In 2010, he had been issued a suspended four-year prison sentence for “assembly and collusion against national security” and “propaganda against the state,” which could be added to his total time behind bars. However, with the application of Article 134 of Iran’s Islamic Penal Code, his 15-year sentence could be reduced to 7.5 years. 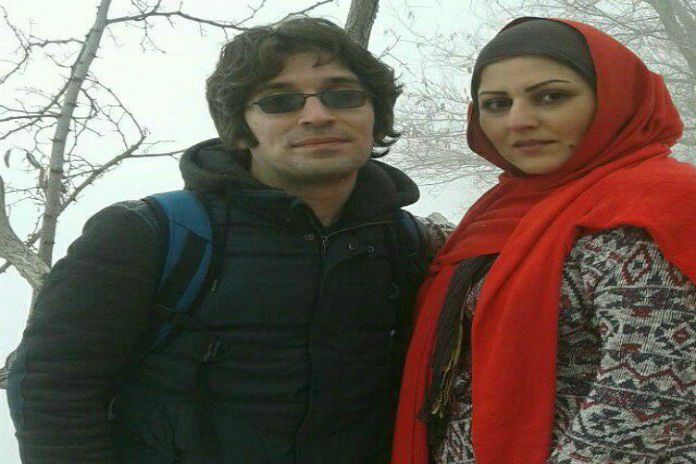