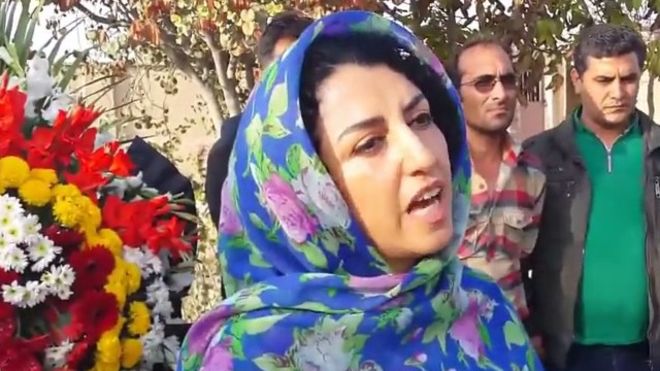 Taghi Rahmani believes his wife Narges Mohammadi is being mistreated in prison because he fled the country years ago.

Iran’s judicial authorities have promised to lift a ban on phone calls between prominent human rights activist Narges Mohammadi and her children, but she has still not been allowed to speak to her kids. Mohammadi, who has only been allowed to speak with her children once since being detained in May 2015, began a wet hunger strike in Evin Prison in Tehran on June 27, 2016 to protest the ban.

“Two days after my wife went on hunger strike, a judicial official met with her and said the Judiciary does not have a problem with her contacting her children but that this is a security issue and the decision is up to security officials,” Mohammadi’s husband, Taghi Rahmani, told the International Campaign for Human Rights in Iran. “He said the issue would definitely be resolved, but so far nothing has happened and Narges is still unable to contact her children.”

Rahmani, who currently lives in Paris with the couple’s young twin children, Ali and Kiana, told the Campaign that one reason his wife is not being allowed to contact her family is because Iran’s judicial authorities consider him a “fugitive.”

In 2012 Rahmani indicated in an open letter that he published after leaving Iran that he has served more than a decade in prison since the country’s 1979 revolution. He was also an active member of the 2009 presidential campaign of Mehdi Karroubi, who has been living under extrajudicial house arrest for over five years for contesting the result of that year’s widely disputed election. Rahmani fled Iran because he feared being imprisoned again for his political beliefs. His children were sent to live with him in Paris after his wife began serving her sentence because there was no one left in Iran to care for them.

Rahmani added that his wife, who has lost consciousness twice since starting her hunger strike, was taken to the hospital on July 3, 2016 to undergo tests. “Narges has become extremely weak… we are very worried for her,” he said.

Mohammadi is being held in Evin Prison’s Women’s Ward where there are no public phones. “This is a great injustice because the inmates there are unable to contact their relatives by phone,” said Rahmani.

Political prisoners held in the Women’s Ward at Evin Prison are routinely denied proper medical care and hospitalization, face restricted or denied visitation rights even with their young children, are deprived of regular telephone contact with their families, and are not provided adequate nutrition, a recent report by the Campaign has revealed.

“I am asking for nothing other than being allowed to talk to my children on the phone. If this demand is too great, irrational, immoral, unlawful, or against national security, please let me know. Convince me, please. Clarify why a mother, declared a criminal by the state, must be denied hearing the voices of her children,” said Mohammadi in an open letter about her hunger strike.

Mohammadi, the former spokesperson of the now banned Defenders of Human Rights Center and winner of the 2011 Per Anger Prize for her activism in human rights, was sentenced in May 2016 to serve 10 years of a 16-year prison term for “membership in the [now banned] Step by Step to Stop the Death Penalty,” “assembly and collusion against national security” and “propaganda against the state.”

In October 2011 she was sentenced to 11 years in prison on charges of “assembly and collusion against national security,” “membership in the Defenders of Human Rights Center,” and “propaganda against the state.” The sentence was reduced to six years in prison upon appeal. In June 2013 she was released from Zanjan Prison in northwest Iran on six billion rials (approximately $200,000 USD) bail because of severe neurological problems.