Two Iranian poets who have been sentenced to flogging and a total of 20 years in jail have fled Iran. 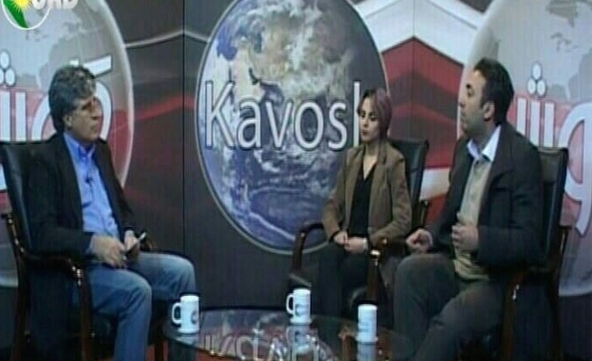 On October 12, 2015, an Iranian Revolutionary Court sentenced Fatemeh Ekhtesari and Mehdi Mousavi to respectively 11 and 9 year in prison for allegedly insulting religion. Both poets were also sentenced to receive 99 lashes.

Although Ekhtesari and Mousavi were prohibited from leaving Iran, according to Iranian media, the two poets fled to neighboring Iraq.

Iran’s semi-official news agency Fars published a photograph of the two poets at what appears to be the studio of a Kurdish television station in Sulaymaniyah in Iraq. According to the news agency, the poets were planning to go to Sweden.

Ekhtesari and Mousavi were first detained in 2013, and endured more than a month of interrogation while in prison, but were released on bail pending their trial and appeal.

Their verdict was issued on October 12, 2015. Ekhtesari was given a seven-year prison sentence for insulting the sacred, three years for publishing unauthorized content online and one and a half years for propaganda against the state. Mousavi was sentenced to six years in prison for insulting the sacred, and a further three years for possessing tear gas and keeping it at his residence. Both were given flogging sentences for shaking hands with a na-mahram – a person of the opposite sex who is not a family member.

“Nowhere in their poetry are there any words or subject [matter] that could be construed as insulting the sacred,” said their lawyer, Amir Raeesian. “All books by these two poets were published with permits issued by the Ministry of Culture and Islamic Guidance.”

Their harsh sentences have also been criticized by free speech organizations worldwide. On October 30, 2015, PEN American Center and 116 poets and writers urged Iran’s Supreme Leader Ayatollah Ali Khamenei to abrogate the “cruel and unwarranted” sentences handed down to Mousavi and Ekhtesari.

“We are deeply concerned by the inhumane sentences levied against Ms. Ekhtesari and Mr. Mousavi for the simple act of expressing themselves by creating art,” said the letter addressed Iran’s Supreme Leader. “Their harsh sentences form part of a disturbing pattern of escalating pressure on artists and cultural figures, as well as journalists.”

The two poet’s sentences follow a wave of attacks on free speech in the country in recent months, where a number of journalists, writers and artists have been arrested by Iran’s Revolutionary Guards or given prison sentences for their work.